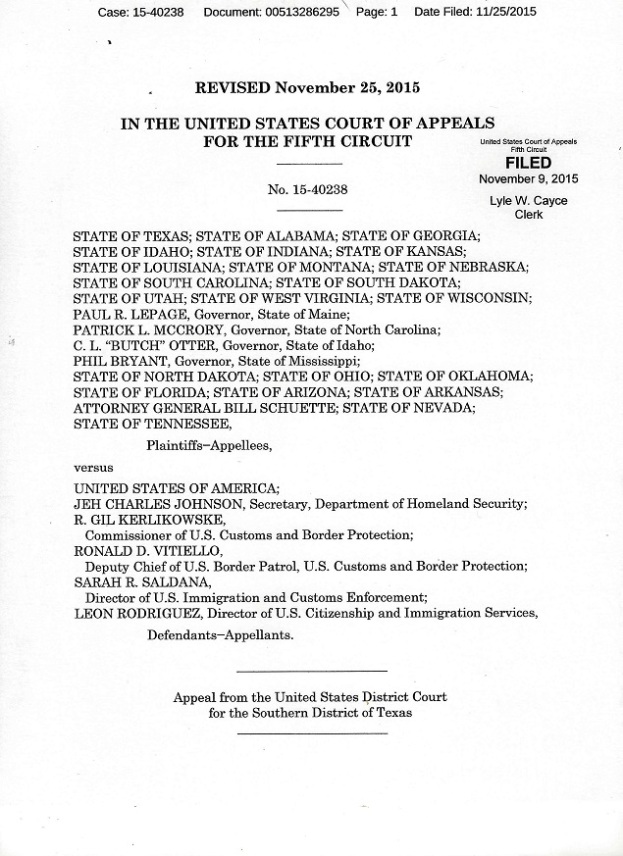 Update to a previous post, An Executive Order or New Legislation?, published on December 1, 2014

I recognized the political pressures that pushed President Obama to issue his DAPA and DACA executive orders on immigration. Members of his own political party and an aggressive Hispanic lobby demanded that he sidestep Congress and grant undocumented aliens legal status. Immediately after the President’s prime time television announcement of his actions, the debate over the constitutionality of the programs began in earnest. Putting legal semantics aside for the moment, the President’s action did in fact give legal status to millions who could have and maybe should been deported. The President and his backers argued that the immigration system needed fixing and someone had to act. Opponents of the planned executive actions countered with the argument that the system had been abused into dysfunctionality and vigorous enforcement of current law would help resolve the problem.

Some of the President’s legal advisers reasoned that the planned executive actions were unconstitutional. Others suggested that the President scale back the reach of the proposed orders. In the end, President Obama did what he has done so many times before, he decided that the politics would guide his actions. I think the President truly believes that the ends justify the means.

In my previous post, I discussed the legal issues surrounding President Obama’s actions. I expressed the opinion that there would be legal challenges to the executive orders and that the court’s would eventually rule against the President’s actions. This scenario seems to be playing out.

In Texas v. United States, 86 F Supp 591 (S.D. Tex 2015) the district court ruled in favor of the plaintiffs. The court granted a preliminary injunction against the implementation of President Obama’s executive orders. The government immediately appealed the decision and order to the Court of Appeals. Round one went to the Plaintiffs.

The U.S. Court of Appeals for the 5th Circuit heard and decided the government’s appeal. In a 135-page decision the Court by a vote of 2-1 upheld the lower court’s decision and order. Thus, the Court continued the injunction against the implementation of President Obamas executive orders. While reading the actual decision of the Appeals Court, one cannot help but notice the weakness of the government’s legal arguments. Round two went to the Plaintiffs.

The government appealed the Court of Appeal’s decision to the U.S. Supreme. The justices had to decide whether or not to accept the case for consideration.  I thought there was a greater probability that the justices would not accept the appeal for consideration. I was wrong. This past Tuesday, the Supreme Court decided to hear the case during its current term. However, the justices requested that the attorneys brief the question of the president’s duty to execute and enforce the laws of the land. The Court served notice that it plans to decide the case on the law and not political or humanitarian  considerations. I believe that the plaintiffs will win this round by a knockout. The court’s decision is expected to be handed down in June 2016.