It is not my intention by writing this post to ridicule or embarrass anyone. After reading this post the reader is, of course, free to reach any conclusion. If you wish to leave a comment, do not hesitate to do so. I read all comments and when appropriate I reply.

The Brothers as Civil Rights Advocates

In 1915 the parents of the Jones brothers purchased a house and accompanying lots in Neptune New Jersey. The property is known as  530 Myrtle Avenue. A white man sold the property to the young Black couple. At the time of its purchase 530 Myrtle Avenue was located in a racially mixed neighborhood. Over 4 decades ago the Jones brothers’ parents passed. Today the  brothers are trying to sell the home in which they were raised.

V. Jones and E. Jones occupy a place in America’s civil rights history. In 1959, just 5 years of after the U.S. Supreme Court decided the case of Brown v. The Board of Education the brothers took on institutional racism in New Jersey’s housing market. They decided that E. Jones would buy a house in the all-white community known as Asbury Gables in the Town of Neptune. The brothers knew that a Black person could easily buy inferior housing in the “Black section of town.” It was public knowledge that Haridor Realty Corp.(Haridor), a New York registered corporation and the developer of Asbury Gables, would “never sell a house to a Black.” E. Jones was gainfully employed, thus he would not have had no problem qualifying for a federal guaranteed mortgage. V. Jones, an attorney, mapped out the necessary legal steps to preserve his brother’s rights and remedies if his application to purchase was denied. The brothers agreed to take legal action if E. Jones was denied an opportunity to purchase a house in Asbury Gables. No civil rights organization knew about the brother’s plan to file a test case.

As expected Haridor refused to build a house for E. Jones in the all white Asbury Gables community. In response V. Jones prepared and filed on behalf of his brother a discrimination complaint with the then Div. on Civil Rights, N.J. Dept. Education of New Jersey. A full administrative hearing was held on the complaint, with all sides being represented by attorneys. The brothers testified about the discrimination that they encountered. The owners of Haridor countered that they had a constitutional right to discriminate against E. Jones. One of the owners of Haridor testified that he “would not build a house for a Negro Asbury Gables, though he would build one in a segregated community.” At the conclusion of the hearing the Commissioner ruled that Haridor had illegally discriminated E. Jones and ordered the company to build him a house.

Haridor Realty appealed decision. The case was immediately heard by the state’s highest court. The New Jersey Supreme in Jones v. Haridor , 37 N.J. 384 (1962) after hearing and reading all the arguments issued its ruling., a ruling that set a legal precedent for future civil rights litigation.  In a unanimous decision the Court outlawed the discrimination that the real estate company attempted to practice. 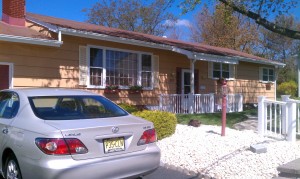 The Jones brothers had succeeded in securing “Negros” the right to equal access to decent housing. The case gave impetuous to the 60’s historic civil rights movement. E. Jones still lives in his Asbury Gables home.

Today the Jones brothers (sellers) are trying to sell the house that their parents purchased almost a century ago. They have asked me to facilitate the sale. I consider it an honor to work on the sale for my father and uncle who, undoubtedly, hold a place in Neptune-Asbury New Jersey history. My best efforts have been invested b into selling 530 Mrytle Ave. The Jones brothers’ life long effort for equal rights offers a unique marketing angle to sell the property. The sellers and I (we) all thought that when we contracted Weichert Realtors (Weichert) to list and sell the house that the company would “bring its A-game to the sale.” It turns out that Weichert did not bring any “game” to the sale.

In August 2012 E. Jones listed 530 Myrtle Avenue for sale with Century 21 (C-21). The agent handling the sale for C-21 was Linda Garcia. She persuaded  E. Jones to sign a long term and extremely client unfriendly listing agreement. C-21 agreed to sell the property “as is.” Then without ever introducing herself to V. Jones she mailed the listing agreement and accompanying documents to him in South Carolina for his signature. The documents were marked with an “X” where he was supposed to sign. There was no cover letter included. Clearly this was not the properly procedure to have followed. V. Jones instructed me to write Ms. Garcia with our objections to the terms of the listing agreement and the manner in which she had introduced herself. In the end because his brother had already signed the listing agreement, my father, V. Jones, signed C-21’s listing agreement in order to stand with his brother and, hopefully, rapidly sell the house.

1 thought on “Weichert Realtors’ Lost Opportunity to Market Its Brand”