In 1960 Berry Gordy Jr. founded the record company Motown . The newly incorporate business was based in Detroit, Michigan. The City of Detroit has long been referred to by Americans and the international corporate world as the “motor city.” Motown had been setup in the very same city that America’s auto manufacturing companies had always called their home. I do not believe that it was a coincidence that Berry chose the name Motown, short for motor town, as the name for his new corporation. In the turbulent 60s Motown was instrumental in integrating popular music with a multitude of black artists whose music collectively became known as “soul music.” In 1972 Motown relocated to Los Angles where it remained an independent company until being sold in 1988. Motown’s run in the record industry was not only successful and profitable the company also left an indelible cultural mark on American society. The City of Detroit has not fared as well as its homegrown record company.

On March 1, 2013 Michigan Gov. Rick Snyder strode up to the podium at a called news conference to address Detroit’s fiscal mess. In the audience were members of the press, a handful the city’s political leaders and corporate officials of the beleaguered business sector. There was no suspense as to what the governor would talk about. Detroit was teetering on the brink of municipal bankruptcy. The Michigan governor had decided to take action to prevent a worsening of the city’s financial condition. Gov. Snyder prefaced his remarks by stating that no other city in the United States was a financially challenged as Detroit. He had determined that city’s “woes too fundamental, too lasting and too large to be solved by the city itself.” Much to the disappointment of local politicians the governor announced his intention to appoint an emergency financial manager (EFM) to oversee Detroit’s finances. The EFM would have broad powers to act on behalf of the public. Some of the city’s school districts are already under emergency management. The city faces more than 14bn in long term debt and has had chronic problems with available cash to meet payroll and other daily expenses.

To make matters worst for Detroit residents Forbes magazine designated Detroit as America’s most miserable city. Unemployment, violent crime and home values at historic lows guaranteed the city one of the top spots on the list. The added fact that the Motor City was on the verge of being taken over by a state appointed financial manager and has been 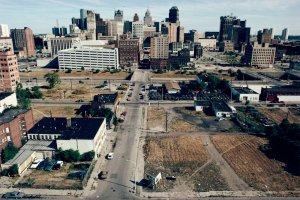 From The Business Insider

issuing debt to pay its daily expenses propelled the city into the top spot on Forbes’ list. Detroit has researched its statutory limit for issue debt. It cannot raise any more money and this has precipitated the crisis for the Gov. Snyder. In simple terms; Detroit is so broke. Seeing the city’s degree of decline in pictures is stunning.

Three years ago Mayor Bing was elected into office. He promised voters that he would turnaround the city’s finances. Every year since then he has had the support of the City Council. His initiatives have met little opposition. Yet, Mayor Bing who, like the governor is an accomplished businessman, has been unable to rein in Detroit’s runaway fiscal problems. Success as a businessman does not necessarily translate into success as a politician. The economic data does not lie; under Mayor Bing’s tutelage Detroit’s problems have grown and multiplied. The bad economy, cutbacks in state and federal aid and escalating pension and healthcare costs have exasperated the fiscal problems. Regardless of these factors I agree with the commentators and experts who point to Detroit’s city government’s incompetency, corruption and shortsightedness for bringing the city to this fiscal abyss. Politics and not economics seem to Detroit’s problem.